Hello! I’ve finally shaken off my blogging lull and decided to post a quick review of the perfumes I’ve bought in February. Yes, I’ve made another purchase at Haus of Gloi – if you’ve read this post, you probably know already that I really like their perfumes.

The first one I’m going to review is Odette. The site description goes like this: clean sun dried linens, tuberose, ginger lily and white musk. I would say this is pretty accurate because in the bottle, this perfume oil really does smell like fresh linen. It didn’t change much once it was on my skin – it still recalled fresh, clean linen drying on a sunny day. There might be traces of soap as if one used too much detergent but Odette really is a very pleasant scent. As the perfume dried down, the musk note became more prominent. Sadly, I couldn’t detect tuberose and ginger lily as separate notes but I still believe they play a major part in this fragrance because it definitely has a floral tinge. While this gem had a low sillage, it lasted for about five hours, which makes it perfect to get through boring, or tough, mornings when you need something clean-smelling to brighten up your day. So yes, I really like it. It’s the kind of perfume you’d put on after a morning shower to amplify the feeling of cleanliness. Or if your clothes aren’t exactly fresh from the washing machine, hehe. 🙂 It’s a safe choice for the days when you don’t know which perfume you’d like to wear, and it’s also very work-appropriate. 4.5/5

First Blush (Tahitian vanilla bean, white tea, lavender and peach) is a charmer in its own right. Fruity lavender gave way to sweet peach once I applied the perfume on the skin. It felt like a sweet refreshment for your olfactory organs. Later the scent evolved into a nice, peachy cream dessert with lavender flowers sprinkled on top. Imagine you’re experimenting in the kitchen: first you take the lavender stalks, then you decide to dice a peach for a lovely summer dessert. You feel like something is missing, so you add some cream and sprinkle some lavender flowers on top of it. Or maybe you go for lavender syrup. You decide. A faint vanilla is all that remains after you’re done eating – a proof that you’re not a complete disaster at making desserts. Oh yum. It’s a very spring-like scent but it will probably do well in the summer, too. Let’s wait and see! 4/5 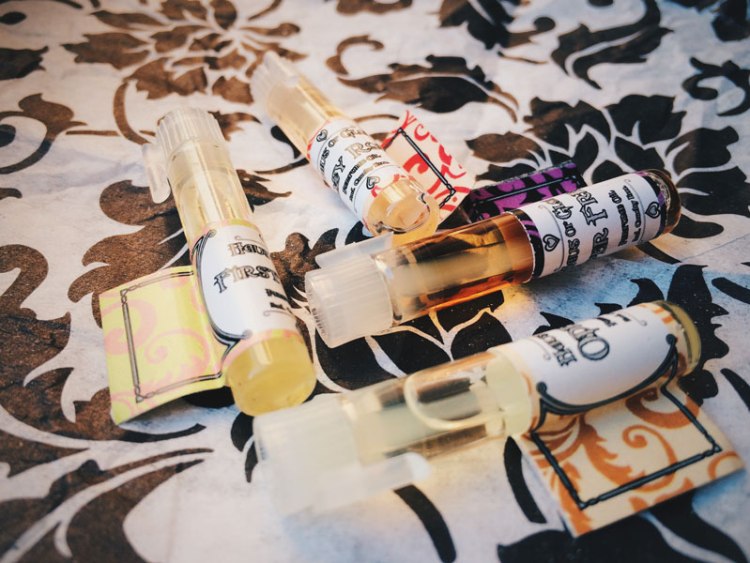 Cozy Rose was a gift with purchase. I was eyeing it even before the Valentines collection was released but when it came down to finalising my order, I decided against it. First of all, the scent description isn’t that informative (Cozy Sweater and our Rose City blended together harmoniously) if you’re not familiar with Cozy Sweater and Rose City, and second of all, I have a slight dislike of roses. I’m wary of rose-heavy scents because they  turn out either too soapy or just plain weird. This one, however, is definitely mixed with some incense, a very strong one. Its smoky sweetness is tamed by the rose note, which to my surprise doesn’t remind me of fancy soap at all. So far so good. After a while of guessing (really; the only incense sticks I’d come across by that point were sandalwood, nag champa, and various apple blends), I reasoned that it really was nag champa as one of the main notes in this blend – and let me tell you I really like it both in the air and on my skin. About half an hour later, the rose started disappearing and giving way to something else. I suppose that’s skin musk? Incense still lingered on, which I didn’t mind at all. If there was some patchouli blended in – I didn’t smell any. The perfume lasted for about 6 hours on my skin but that’s the case with most HoG scents that I own. The sillage was slightly above average, meaning that I could smell the fragrance in the air around me and not just on my skin. Considering this is heavy on rose, I should dislike it (see my review of Smelly Yeti’s Dame It). However, this rose note isn’t soapy or heady. Instead, it’s a nice floral scent, enhanced by nag champa. This one’s nearly too strong but I like it enough (and got used to it after a few days of wearing it), so it doesn’t ruin my overall impression. I actually really like it, and I’m happy HoG have included it as a gift with purchase. I will consider purchasing the full-sized version of this! 5/5

Super Freak (rich vanilla, heady incense and a trace of red wine) was another freebie I’ve received. This one smelled of red wine and sweet fruit; it’s almost like sangria but without oranges. Or maybe it smelled like the flavour of those violet Mentos bonbons. Does this make any sense? On skin this was somewhat soapy. The fragrance reminded me of soap but also of something sweet. I was thinking, maybe it’s nag champa but nope, it’s milder and sweeter than that. I compared it to Cozy Rose but Super Freak smelled totally different and its scent actually made weird things happen to my nose. So I suppose this really is some other kind of incense. If someone knows – please let me know. An hour after the application I could finally smell some vanilla. Not much, but some. The sillage got super low during the dry-down. Too bad! I’d say it’s kind of work-friendly (if your skin amps wine notes, you might want to skip it on Monday morning… 😉 ) but it dissapeared from my skin so fast that it couldn’t really make an impression. I won’t be destashing this one but I won’t wear it often, either. 3/5

You can browse Haus of Gloi goodies here. Their average turn around time is 12–14 days.

Have you tried any scent from this collection? Which one is your favourite?

Check Out My Top Posts :)